In preparation for the upcoming snow season, the Archuleta County Road and Bridge Department would like to provide information to the public regarding snow removal operations.

Archuleta County Road and Bridge plows approximately 340 miles of roads (222 miles of Primary Roads and 105 miles Secondary Roads) and strives to open roads as quickly as possible. While several strategies are used to meet this goal, time is still required to clear roads. County Roads that have been categorized as high priorities, such as school bus routes, are plowed first. The remaining roads are plowed based on priority and route efficiencies. Both Primary and Secondary Roads will be plowed. Although snow removal crews normally begin clearing the roads at 4:00 am, some of the lower priority roads may not be cleared the day of the storm. Hills and intersections are sanded for safety as required. Typically, plowing operations begin when there is snowfall accumulation in excess of four (4) inches. On days without snow, crews will clean up and push back snow banks as needed. All roads may not receive attention on cleanup days.

Under normal circumstances, plowing operations occur on regular work days, starting at 4:00 am. Weekends and extended shift plowing may take place under the direction of the Public Works Director when considering impacts of total accumulation, current conditions and forecasts.

Schedules may be interrupted, or postponed due to unpredictable or unusual weather conditions, emergency situations, safety, and resources.

There are usually two different types of snow removal operations.

The first occurs during the storm itself and consists of passes with the plows to keep  the roads open. This includes clearing a path sufficient for two vehicles to pass. It also includes clearing cul-de-sacs enough to allow an emergency  vehicle to turn around.

The second operation performs cleanup and preparation for the next snowfall. Secondary work begins when the storm subsides and consists of widening the traveled portion of the road, pushing snow back and plowing out wider areas on the roadways. It may be several days between the first and second plowing.

The snow plowing operation may result in a berm(s) of snow across private driveways of the approach to county roads. The County does not have the resources to keep driveways clear or remove berms in front of driveways. While reasonable effort is made to plow in a manner that will minimize the snow that is deposited in front of driveways, berm removal is the responsibility of each individual property.

When facing the road from your driveway, Snow Plows Drivers will plow from left to right. Property owners and contractors are encourages to place snow removed from their driveway in their lawns or to the right of their driveway. Clearing out as much of the snow as possible from the left of their driveway will help eliminate the amount of snow resulting in a berm across their driveway. 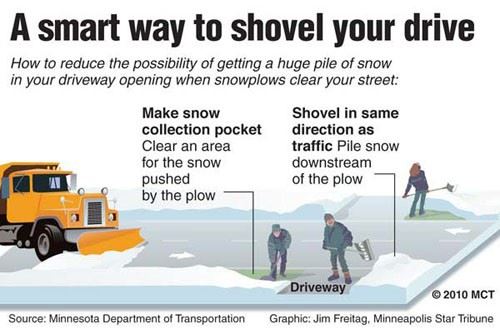 Why Snow Gates Are Not Used:

Snow gates, as seen on YouTube or Tiktok are only efficient when used in ideal conditions (a previously plowed road or snow accumulation less than five (5) inches). Wet or heavy snow cannot be pushed effectively with the gate down. The gates cause the operator to drive slower, potentially causing them to take longer to clear the roads. Snow blocked by the snowgate eventually has to go somewhere, usually to the right of the driveway, where there may not be room to put snow, or even out the opposite end of the blade back into the roadway. Roads plowed with snow gates are often more narrow than those plowed with traditional equipment. Wings cannot be used with snowgates. Plows with gates can no longer reach all the way to the edge of the curb or roadway, and snow doesn't' get pushed far enough off the road. Additional crews are required to re-plow the roads, widening it in preparation for the next storm. Gates cost $10,000 to $25,000 to install and maintain with parts and labor. Snow gates are not practical or beneficial in Archuleta County.

Children playing in the snow banks left by the snow plow equipment is a major safety concern. As you know these machines are big and can be pushing back snow banks any given time. Avoid tragedies and inform your children that building snow caves and playing on the berms is dangerous.

Roadside parking inhibits plowing is prohibited along all County roads and within any County road Right-of-Way. Vehicles in the roadway during snow removal operations will be towed at the owner's expense.

Homeowners and Contractors are cautioned that pushing snow across a County Road at any time can create hazards and are advised not to do so. It is unlawful for any person to deposit snow plowed from a private driveway, road or other source, onto county roads or Right-of-Ways per Colorado Statute §43-5-301 as revised.

Trash carts should be placed in the driveway, a minimum of five (5) feet behind the front of the snow berm to minimize the possibility of being knocked over. The County is not responsible for trash carts that are knocked over.

1. SLOW DOWN and use caution around snow removal equipment.

2. Keep a safe following distances behind the plow to help you to avoid flying snow and sanding material.

3. Stay out of the equipment's blind spots!

4. Turn your headlights on.

5. Flashing blue and yellow lights on a truck indicate an emergency vehicle and it is ILLEGAL to pass them.